The story of Pionier, a Waarschip 740.

In July 1980 I bought the kit-version of a Waarschip 740, hull number 8 and it was delivered by the end of that year. These kits were made in a small village in the very North of the Netherlands, called ″' t Waar″ and consists of a wooden bare hull, the roughly pre-sawed Bruynzeel Marine ply and all other mahogany profiles, West epoxy, paint, the cast-iron keel and the basic hardware. The boat was advertised to be made of ″synthetic wood″!

For the construction of the boat I could use the workshop of a friend of mine. In the same workshop he was building a 33 ft. Van de Stadt design, the Pionier 10.

Being not awkward, but not knowing if boat building was something I could manage, I choose for the kit version. Starting with just a few plans, as my friend did with a stack of drawings from Van de Stad Design, was one step too far for me in that time. And besides of that, I wanted to go sailing and not building.

In the end, the construction took more than three years, or better said, 3 half years.

It was a busy time; building a boat, starting with my carrier and I fell in love with Monique (10 years later we got married). 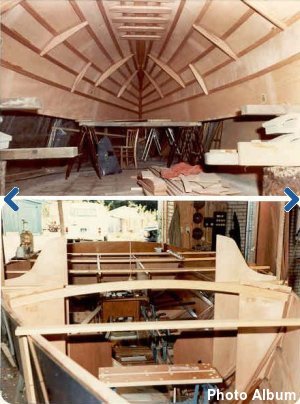 All time consuming things, while my friend was thinking I could do the building within a year. Besides breaking out the doorway (his boat was too wide for passing the door) my unfinished boat stood in front of the doorway. So, I had to move and went to a yard near the Eem River. There I finished my PIONIER (an applicable name, the project started in the shadow of the Pionier 10 and I felt everything was some kind of pioneering; ″pionier″ is the Dutch equivalent for ″pioneer″).

By the way, 40 years later (2019) this wooden beauty of my friend (†RIP) is still going strong, now under command of his son and being prepared for a singlehanded circum navigation around the world. (Go Herman!)

First thing to do was conserving the outside with West epoxy and painting. In this stadium it was easy to have the hull upside down till painting was finished. Then we turned the hull with help from some friends. With building the inner structure the hull gets her rigidity.

Typical features of the Waarschip designs (for all models) are the clinker built multi-chine plywood hull and the typical reinforcements for the cabin roof on the outside (easy to built). Every piece of wood has been sealed on both sides with 3-layers of West epoxy. For the non-skid deck I choose Treadmaster.

While not all details were ready, I had to sail. I'm done with it. Pionier has to sail. We organized a little party for launching.

Monique christened the new boat by throwing a bottle of champagne against the keel, that had just before been mounted under the boat. I checked under the floorboards for any leakage. Nothing, the boat seems to be watertight. Hopefully the still wet kit will also cure underwater.

All partygoers were invited on board. The only 24 ft long boat sighed deeply under all that extra ballast and pointed the builder in a painful way to his awkwardness. Water flooded the floorboards. First I thought of a joke from one of the guest but in the next second I realized that this was a bitter seriousness.

My pride had to be quickly evacuated and when she again floated higher up on the water, the supply of water also stopped. It soon turned out that I had forgotten to connect the exhaust of the engine to the thru-hull fitting in the transome. My first blemish on the skippers soul ....... although corrected quickly and fortunately it did not detract from the otherwise enjoyable afternoon with family and friends

At the left some photo's
of our first sailing trips.

and the competition between two yards both claiming they are the official Waarschip Yard:
Waarschip.nl
Waarschip.com
a rather strange situation ...