Construction of the beams

Construction of the beams

I guess a 25% of all the F-39 plans describes the construction of the beams, what looks to be very intimidating at first sight. I seriously played with the option of outsourcing the build of them. And who better than Ian Farrier himself is the best party for the work. His offer was very reasonable, however, our personal circumstances has changed due to the move to a new house. Our old house is still unsold so we have to be a little careful with the cash. In near future I also have to buy the engine and other costly hardware. So, with this in mind, I decided to build the beams by myself, as was also the original plan. 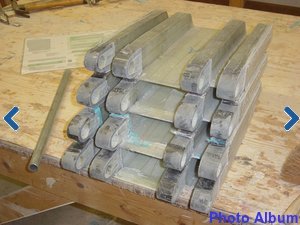 The carbon beam anchors are being made in the same way as the hull anchors. With that experience constructing these structural very important anchors went much faster. 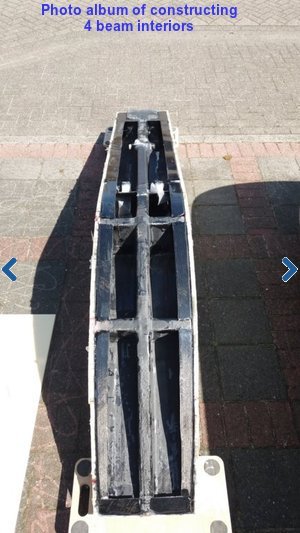 At an early stage, I got the beam mold of a fellow boat builder who moved to Australia. It was sitting in my garage with the goal to take up the construction during the winter months. Several times I cleaned up the garage to make room for the build but just as often it became a mess again, delaying the start of the build once again.

Somehow I look very much against it.

Years went by but finally in the spring of 2017, under pressure of the necessary evacuation of my workshop sometime during the course of this year, I took up the challenge to start the build of the beams. I used a 4 week holiday to achieve a significant progress in the construction. My day and sleep rhythm was determined at that time by the curing of the epoxy. Fortunately, the work was at home in the garage.

The standard F-39 beams are made of a combination of glassfibre and carbonfibre, the latter for the unidirectional reinforcements in the top and bottom of the beams. However, I have chosen to make the beams full carbon with the main reason of saving weight.

I did the lamination of the interior beam for beam in my garage at home. In order to take full advantage of gravity, I arranged the laminate as much as possible in a horizontal plane by turning the mold in the desired direction. (which was heavy at the end) When the beams where ready I moved them to the workshop near the boat for the next phase of the construction, applying the carbon laminate at the outside of the beams.

The laminate on the outside of the beams proved to be a logistic challenge to put the many patches in equally different sizes in the right place. The top and sides of the beam are relatively straightforward but the bottom is another story. I have chosen to leave the lower folding strut molds in place as long as possible but at the same time they form an awkward obstruction. Also the beambolt recess and the upper folding strut recess are time consuming parts to do well.

All the time I was a bit worried about the releasing of the lower folding strut molds. I made them out of three layers of plywood with packaging tape as a release surface. To avoid all risks on a not releasable mold I sprayed the plastic tape with an extra coating of McLube Sailkote.

The worries proved to be premature. I screwed in two tapped threads and with the help of a few wooden blocks I was able to pull out the molds very smoothly.

My worries are certainly not over, but releasing these molds gives me confidence in the next job, making the beam sleeves. Not that this is very difficult, I made them with vacuum bagging, but releasing them from the beam outer end is another story. I was warned by the experience of other builders who had great difficulties with releasing the sleeves. This helps me alot executing a well proven releasing procedure to lever off the beam bolt. So I made some wooden beams and placed them over the beam bolt nut with a big washer in between. I prepared the beam outer ends with 5 layers of a mold release wax. I have used this stuff before and had not great difficulties with it ......

However, somewhere in this process or in my thinking I made a big mistake and my worst nightmare has become true. The sleeves did not want to loosen. Even with a very brute force they are not prepared to separate from the beam. Of course there is always a plan B, but damn, this feels like a loss. I ended up with making a cut in the underside of the sleeve giving space for some wedges. All four sleeves were more or less glued to the beam at the same spot, the edge between underside and outer end. Coincidence ? or has anyone a smart conclusion ...

In retrospect, the preparation with the mold release wax was not good enough. Did I forget this edge ? did I forget it five times ! (I'm not surprised at anything) or should I have used a PVA release agent in addition to the wax. Or using packaging tape in addition to the other mold release stuff which gives then two chances as the tape itself is also able to release. I don't know. What I do know is that the approach of the four beams at the same time did not prove very clever for such a delicate work. There is no way to adjust the technique and make improvements in the meantime.

What I do know now is that plan B is not a big deal and is a good solution for quick builders. Thus not worth a nightmare ;)

Hurray! Beams are now ready to be assembled with the main hull and floats.

After a long time of no boatbuilding I started the build of the fairings in front of the beams. I needed some time to reorganize the garage and collect the right tools for the composite work on the beam fairings. There were also some remnants of resin and hardener and the first glue job with the foam strips is a nice opportunity to use up al these remains. I pressumed the unlabeled clear bottle is the one with the resin and the small heavily used bottle the one with the hardener. In hindsight a big mistake as the epoxy bog does not want to cure. A better look at the unlabeled clear bottle shows that it is not resin but also a hardener but from another brand and almost odorless. Da$%!*, stupid mistake and have to break down the first fairing. Nevertheless much better than a wrong ratio between resin and hardener that leaves behind a sticky mess. This stuff is easy to remove and is is just a matter of waste time. The trial fit on the starboard front beam is satisfying. The plans give the possibility to make a build out on the cabin to match with the fairing. But I prefer to make a small extension to the fairing with the same goal, a fair match between cabin and fairing and beam. (to be continued) 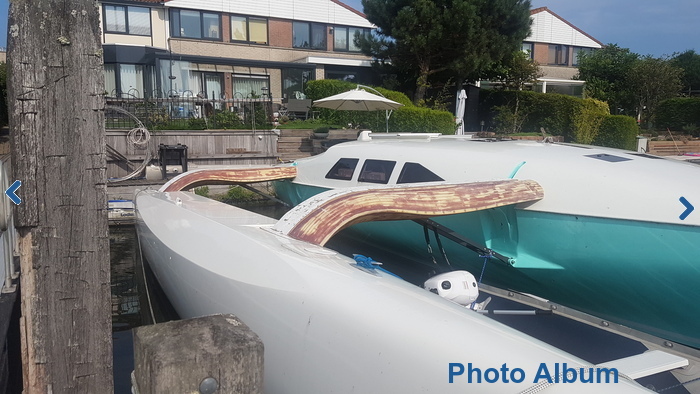