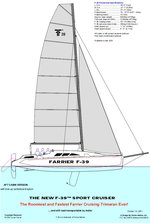 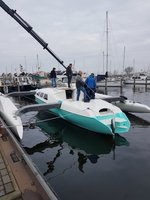 The Farrier F-39 trimaran, a further development of the Farrier F-36 trimaran, is a large ocean going sport cruiser, with the now third generation Farrier Folding System™ incorporated. This gives tremendous versatility for an ocean capable boat. Folded beam is 15' (4.57m) and is thus small enough to access most inland waterways and locks.

The fractional rig is efficient and easy to handle in all conditions, and the boat can be sailed to its full potential with a minimum of sails. The jib will be self tacking and the screacher, set from the bow pole, eliminates the traditional genoa and multiple sail changes, making sail handling a breeze. It's even more ideal for cruising.

The daggerboard is centered in the main hull, while the new designed transom hung daggerboard style 'kick-up' rudder is housed in its own composite case. The self-draining center cockpit with wheel steering can seat six. The 30HP Yanmar inboard engine is located in an accessible area under the cockpit. Maneuverability is excellent under power, due to the trimaran's superior turning ability, its center hull and daggerboard being natural pivots.

Interior will accommodate eight, with standing headroom throughout. Galley is to port, and a chart table is on the starboard side, along with a wet locker. Dinette will seat five, and can be converted into a large double bunk. Starboard settee is wide and comfortable, and can be converted into top and bottom bunks. Forward, there is a private bathroom with head, washbasin, and a separate shower. Forward cabin has a double berth, with seating room aft, and large storage areas underneath. The aft cabin has a double berth with full sitting headroom. Access is through a hatch in the aft cabin front, or through under the cockpit.

After obtaining the F-36 plans Ian Farrier updated this design to the F-39. So finally, it is this combination of the best aspects of the F-25C, F-31, F-31R, and F-36, coupled with many improvements from F-36 owner feedback, that I am building. A number of other new features to incorporate in the F-39 are now being tested on the also new F-33. I think these new designs are the next generation Farrier tri's, with the addition of the newest materials and visions, among other things influenced by the recent successes of the big multihull races.

While the F-36 is provide with a fixed beam, but demountable for occasional transporting, for me the most important modification to the F-39 is the addition of the Farrier Folding System for marina docking, or canal traversing. Other new features:

For the records, below the original Farrier files: