We were young and in love, with each other and with the boat. After years of diligent work our homebuilt boat made it possible to learn off shore sailing. However, this tender happiness was not complete without a dog. When young one can aim for these kind of wishes; a seaworthy boat, a beloved wife, a dog, a career and kids, in this order (it went differently, but that's an other story).

It happened in Muiden, a cozy little harbor on the Southside of the Dutch IJsselmeer, that a big black dog jumped from the neighbor boat through our cabin roof to the quay. A matter of a high needed pee and scratches in the fresh paint of our cabin roof. Instead of throwing overboard that silly youth ideals, I asked the neighbor what kind of dog this was. So, it appeared to be a Setter, to be precise a Scottish Setter also known as a Gordon Setter. Now this was a nice coincidence, as Scotland was one of our planned destinations with the new boat. 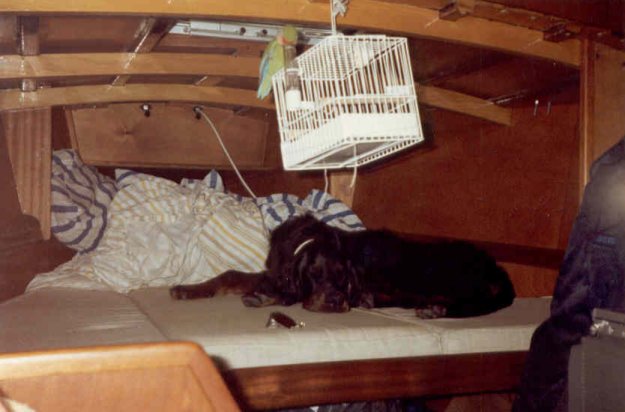 The costs for a puppy was slightly more than a B.O.A.T. buck and about the same amount as the highly needed dinghy. So the choice was made for the pup and the purchase of the new dinghy was delayed for another year.

We christened the pup Eelco, after an old ship dog of friends. Eelco grew up as a true sweetie, with a permanent loss of hair, slobber beak and sharp nails. He liked the boat and his favorite place was our double bed in the bow area. The more wind and waves, the more he moved to the front of the V berth, till he was clamped between the anchor locker and berth. Despite the heavy movements in that bow area, he never got seasick.

His nose was fabulous. As soon as he turned up in the companionway, the shore must be nearby. After a longer period at sea, Eelco was not able to contain himself and kept groaning, tweeting, barking, slobbering and bagging till he could set his foot ashore. This behavior required us often to make a detour. As long as possible keeping coarse as far out at sea as possible and at the end sailing a straight coarse to harbor in a right angle to shore. 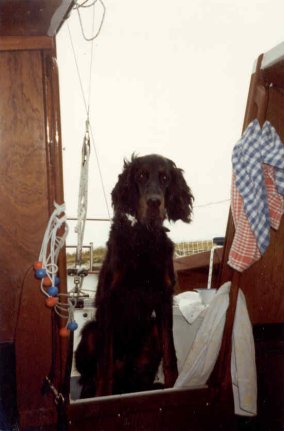 His nose was also a convenient navigation device but fell into disuse with the arrival of the AP Decca navigator on board (nowadays superseded by GPS). This navigation aid gives us the almost exact position of the boat and the Estimated Time of Arrival in harbor. So, Eelco arriving in the companionway wasn't a surprise anymore and could even be estimated by subtracting a hour or so, depending on wind and current, from the E.T.A.

Eelco developed himself as a very smart dog. Starting the engine was the same as harbor in sight, even when shore was far out of reach. He then suddenly trusted more on his hearing than on his nose. When the wind went down, it became just some floating, keeping the dog quiet, going nowhere, but at least in peace.

Eelco was able to hold his pee for at least a twenty-four hours. His bowel movement was a bit problematic so to say, varying between peanuts to peanut butter and Worchester sauce. But worse was his choosiness for the toilet. The spot of choice had to be chosen very carefully and must be grubbed and flatten out. Our boat was not the ideal place for that, but Eelco was not aware of that fact. Again and again he tried the durability of the paint in the cockpit. One can imagine that the cockpit floor, just in front of the cockpit drains, was by far the most frequently painted part of the boat.

From childhood on I learned Eelco to hang on me. With his 70lb. weight I set him on his hind-legs at the cockpit settee and folded his forelegs around my neck and then, with a small jump, he clamped his hind-legs around my waist. In this way I had my hands free to walk over the other boats or climb on a ladder to the jetty, with Eelco hanging on, wheezing in one of my ears. A funny show for the spectators, but safe and clean. Even dog hatred boat owners allowed me to pass their decks. No shit or wee-wee, no scratches, at the most some black hairs who immediately blew away with the wind.

Except when the stays needs renewal because then they become real hair catchers.

When Eelco needed to pee he sometimes became very impatient, in particular after a long sailing trip. This often causes some concern at the boats near the jetty. He then tried to jump but was usually entangled in the safety line from the first boat along the jetty. When this was a steel wire, well, only some black hairs around it betrayed the pasting of the dog. But there are synthetic safety lines too and with these wires it became a mess, although they didn't break.

Or he fell off and in the water. Then there was panic, he couldn't swim. We gave him swim lessons during two years at the beach, but gave up. We had a dog that couldn't swim and had to live with that. Fortunately his tail was long and strong and more then once his life was saved by grabbing this handle. The fact he couldn't swim was never an obstacle for his love for the water. His faith in my wife and me was endless.

Setters are fine and slender hounds, with the Gordon Setter as a somewhat bigger and coarse version. In hindsight we had better named the dog after Bacchus. He was an incredible guzzler with a permanent hunger, despite the regular cure against worms. He gave preference to eating from the floor and for this he turned over his dog's bowl to spread out the food around him. While eating he cleaned the floor with his long ears. At home this behavior lead to a banishment to the garage, aboard this was more difficult.

The necessary diet during longer sailing trips created an unscrupulous gorging in Port. Of course we cleaned up the jetty afterwards, but care was necessary to prevent slipping over the side. We knew that, but the accidental passer-by was not prepared and with his sudden motion attract Eelco's attention. With his fat mouth, nose and ears he always enjoyed a good game with people.

While Eelco got older, every year our destinations were chosen further away and with this the boat seems to become smaller and smaller. We saw other boats with nice doghouses, keeping the rest of their boat interior dog-free, while our yacht altered in a sailing dog's basket during longer off shore sailing trips. Another problem was that in one of our preferred destinations, the UK, they don't like "Continental Peds". Entering without a long period of quarantine is prohibited, so we visited his homeland without him. And this pleased us better and better, along with the growing years of the dog. More often Eelco became a welcome guest in the boarding kennel while we went sailing.

Eelco died after a long and happy life. His mess is now replaced by the toys of the children, our kids, who loves this story, and who wants a puppy .... please!