During the preparations for the construction of Fram I studied all possibilities for the propulsion system. In principle, I did have a preference for an electric drive. A system that was still in its infancy at that time. Entering this project was a big challenge in itself and that is why I did not feel the need to develop such an extra challenge. And besides of that there is (was) a weight penalty in the form of the required battery capacity. In addition, I also have to admit that I have also been put off by some failed projects of electro engines in multihuls that have been replaced by reliable diesel engines

In retrospect, partly due to the advancing technology in electrical drives and increasingly affordable solutions with Lithium-Ion batteries, I might have made a different choice.

An outboard engine, though widely used for multihulls, is not suitable for me. Main disadvantages are the weight at the end, bad behavior in waves (this is an ocean going vessel) and the fuel (petrol is highly flammable and also poorly available in the maritime environment).

It thus becomes an inboard diesel with a prop shaft. A saildrive would be easier to install but would spoil the drying out capability of the trimaran and is therefore not an option.

While writing this (renewed) engine page it's a long time since I started this building project. At that moment the Smart CDI engine was a new marine engine on the market and looked quite promising. Since then I've learned a lot and it became obvious that this engine won't make it till purchase stage. A local supplier offered me a good deal for a well-proven and globally usable Yanmar 3YM30 engine.

As the old engine page hits a lot of Google searchers and direct links, I've moved the page here.

While working on the starboard interior, that was also the perfect stage to figure out the stern tube assembly. Therefore I made a "mock-up" of the engine and stern tube to get myself an idea of what to be expected for the engine installation. Tt was ultimately in the construction of the second main hull half, while it was still on its side in the temporary building frame, that I actually made the stern tube.

Next question is what kind of propeller shaft support bracket to choose. The plans calls for the fin or P type but in my view these have some disadvantages. First, it is not made of composite but of stainless steel, bronze or brass. 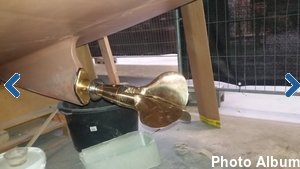 This means a different material that sticks out of the hull with risk of leakage as it is a subject for high forces. To me it also looks quite vulnerable but it has to withstand ropes or netting that can be caught by the propeller but also a stone/rock on the wrong place when drying out.

I found these photo's of a not so happy P-bracket boat owner (caught by a lobster pot rope).

A more solid construction is possible with the reinforcement type shaft support, the skeg with build in stern tube. Advantage it is it can be made as a whole with the hull (all composite) but disadvantage is some more drag, more difficult to make and some extra facilities for the water lubrication. I think I can minimize the drag disadvantage by making the skeg as small and thin as possible with a carbon plate as base.

For my ease of engine installation and to reduce vibration and noise I choose the Aquadrive Constant Velocity (CV) drive shaft. The drive shaft of variable length includes two true plunging Constant Velocity joints that work independently at any angle. This eliminates the need for accurate engine alignment, either during initial installation or subsequent use. The rolling action of the balls within the CV joints absorb all axial and radial loads, permitting the use of very soft engine mounts as well as reducing wear in connected bearings. Massive bearings transfer the thrust directly to the hull and not the engine. In addition, the propeller shaft is much better supported, leading to smoother running and less wear on the stern seal 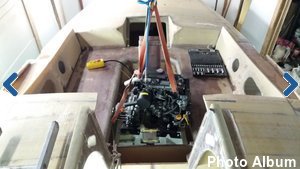 During the construction of the cockpit I also carried out the construction of the engine foundation. At that time, it was still the easiest to implement. For the longitudinal engine girders the plans show a 12mm. ply web box with wooden 40x40 flanges all around. I try to avoid the use of wood as much as possible so instead I made them of 6omm Core Cell foam (4x15mm glued together), a glass fiber corner profile at the top and all around another six layers of 600gm knitted glass fiber. For the nuts of the engine mounts I've incorporated fortified recesses. To properly align the engine foundation and the mounting of the engine mounts with respect to the previously made stern tube I used a wooden mock-up of the diesel engine.

After I finished the cockpit, I kept a recess to lower the diesel engine to the foundation. Afterwards the recess is laminated again. I deliberately did not make a removable hatch to prevent any leakage and to ensure the stiffness of the cockpit floor. If the engine ever needs to be lifted again, a new hole is cut quickly.

The engine is equipped with a wet exhaust system. Normally the gases go out through a waterlock and a gooseneck. But I replaced the gooseneck with a gas / water separator. It seperates the injected raw cooling water from the exhaust gases and also functions as a gooseneck, providing an excellent sound attenuations so it no longer produces disturbing, gurgling exhaust noises. Instead of one outlet, this system requires two outlets, one for the exhaust gases and one for the cooling water.